Let me tell you something!

I was feeling creative and over two day period, I put made a desk using old IKEA parts. It has a shelf, with sides and a green back. The picture is below! I even GLUED the sides to the table and the top of the shelf to the sides! I never use glue! I used the drill and did an amazing job! It is more sturdy than the old desk! You can see the picture below!

It is not uncommon for me to screw up doing this type of things because I either drop the screws or, yeah that! I would usually abandon the project and throw away all evidence of… And there were a few projects that failed miserably!

Not this time! It went very well! I even used a drill bit to make a hole. Smoothness!

And then I moved the couch!

Feeling flushed by my recent success, I attempted to move the pee-stained loveseat downstairs! My conscience was bothering me, it was YES!

(Paraphrased from The Police: Murder by Numbers.)

I got it down the stairs just fine, and then it got stuck! I was cussing and fussing and sweating! My wife was out shopping!

No I will not show you pictures!

Suffice to say, I got the couch downstairs! Two days later, we got our new puppy! Her picture is included!

Why did I go from accomplishment to damaging the house?

Or was it stupidity: “I’m a man! I will move this freaking couch before the wife returns!”

Perhaps it was chauvinism: “I am the man! I am going to move this freaking couch!”

Perhaps I was suffering from ennui, which is a fancy word for boredom: “I’m bored man, moving this couch will give me something to do!”

It might also be from ataxic reasoning that sorta goes rational to irrational without due diligence! Do you, fellow Ataxians, experience these flips? Pray tell!

Have a great day! 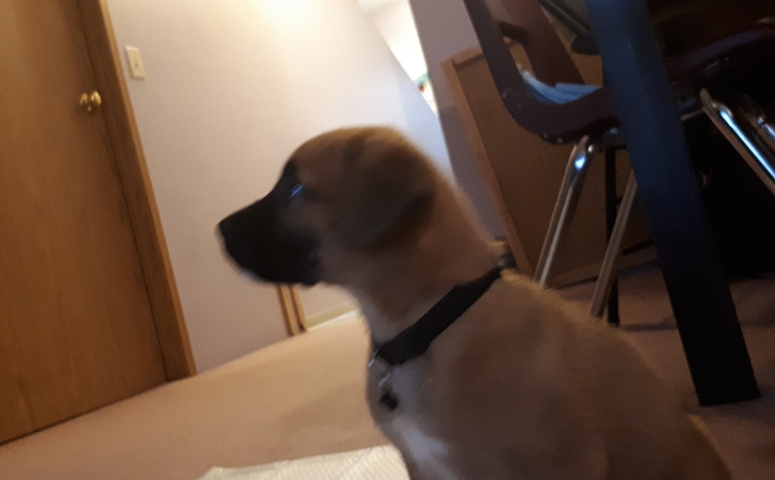